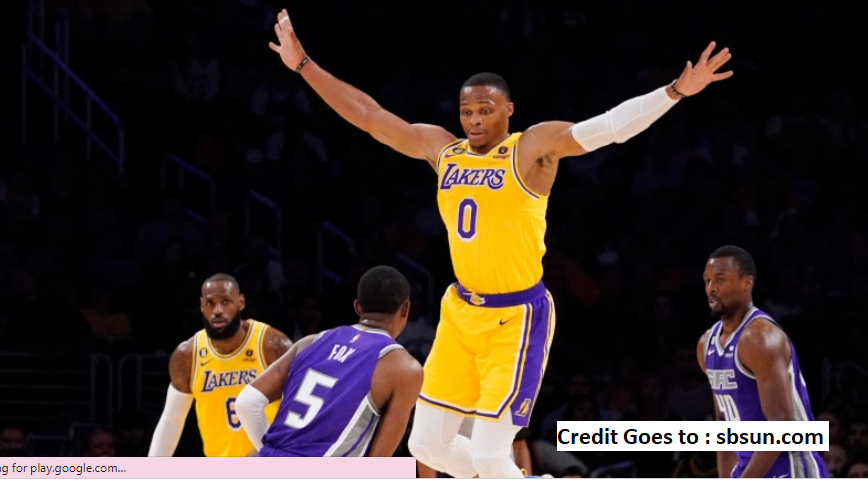 Darvin Ham claims the Lakers support the star amid trade rumours surrounding Russell Westbrook. Ham spoke out in favour of the 33-year-old guard before the Lakers’ preseason matchup against Sacramento, possibly his biggest stance to date.

In Los Angeles Before training camp, for the past week, and probably certainly into the foreseeable future, they have been circling.

Up until the trade deadline in February, Russell Westbrook will be subjected to a barrage of trade speculations as long as he remains a Laker. But since taking the job, Westbrook’s coach, Darvin Ham, has openly defended him. On Monday, before the Lakers’ first preseason game against Sacramento, Ham made perhaps his loudest pro-Westbrook speech to date.

Ham stated, “He’s ours, and we love him and want the best for him. “For him, I have a strategy. When they handed me the job, they included him in that plan. So, for him, camp has been fantastic. He played skillfully. Energy levels have skyrocketed. It’s been fantastic.

In line with this, LeBron James, Anthony Davis, Kendrick Nunn, and Damion Jones all began for the Thunder against the Kings. Westbrook seemed confident after making his first two shots of the exhibition, replete with a “rock the baby” celebration following a driving layup against De’Aaron Fox.

The nine-time All-Star is still being shopped about by the Lakers.

Multiple sources confirmed to Southern California News Group that the Lakers and Indiana Pacers had recently held trade negotiations. However, the rumoured exchange of Buddy Hield and Myles Turner for the Lakers never materialised, just as negotiations with the Brooklyn Nets and Utah Jazz also produced no results. The Lakers refused to part with both of their 2027 and 2029 first-round picks in a prospective trade, according to The Athletic, who broke the story first. Trade negotiations proceeded up to the start of training camp.

At the beginning of training camp, general manager Rob Pelinka stated that he was open to trading draught picks, “but it has to be the right one. One attempt is all you have to make it.

Trade rumours will undoubtedly continue considering the erratic relationship between Westbrook and the Lakers over the past year. It was “the nature of the beast,” as Ham put it.

Westbrook would be in line to clinch the starting point guard position if he defends and plays effectively on offence, according to Ham, even if the Lakers haven’t committed to having him start at that position when the regular season starts. Ham reported seeing both of those boxes checked thus far in camp.

Ham said that the defensively, “He’s been a strong presence on the ball and he’s gotten after it: a lot of numerous efforts, in terms of overcoming screens and still getting to the player with a battle.” He continues to be one of our best athletes and is quite athletic. Regarding his attacking play, he’s been incredibly effective. Like everyone else, he is acting on our requests, therefore he is putting his money where his mouth is.

Kings coach Mike Brown took the assignment literally when asked if it was “poetic” to go off against his former assistant coach in both of their preseason debuts for their respective teams.

Darvin Ham: I brought him in the league a while ago/I hope to kick his (butt) tonight/If I see him in the street/I would never dare him to a fight, he put together a few rhyming couplets off the top of his head.

The Lakers should be grateful to Brown, a former coach in Los Angeles, for putting Ham on his current career path. In 2011, Brown became the first NBA executive to hire Ham, setting him on the path to a career that took him to Atlanta and Milwaukee.

Brown, 52, expressed his delight that Ham had finally succeeded in becoming a head coach after several years of trying to do so.

Throw the coaching and the other things aside; Brown remarked, “He’s a terrific human being who deserves a shot and I’m delighted he got a chance.” He was given a chance by the Lakers, and knowing him, he would battle, claw, and do whatever is necessary to put things right for himself, his family, the team, and the community.

During his pregame press conference, Ham maintained his composure.

Despite being new to this role, he said, “I’ve sat in this seat before owing to (Milwaukee coach Mike Budenholzer) and a few mishaps.” It’s game day, I’ve been in the league 26 years. There is only anxiety—no nervousness. I simply want to begin.