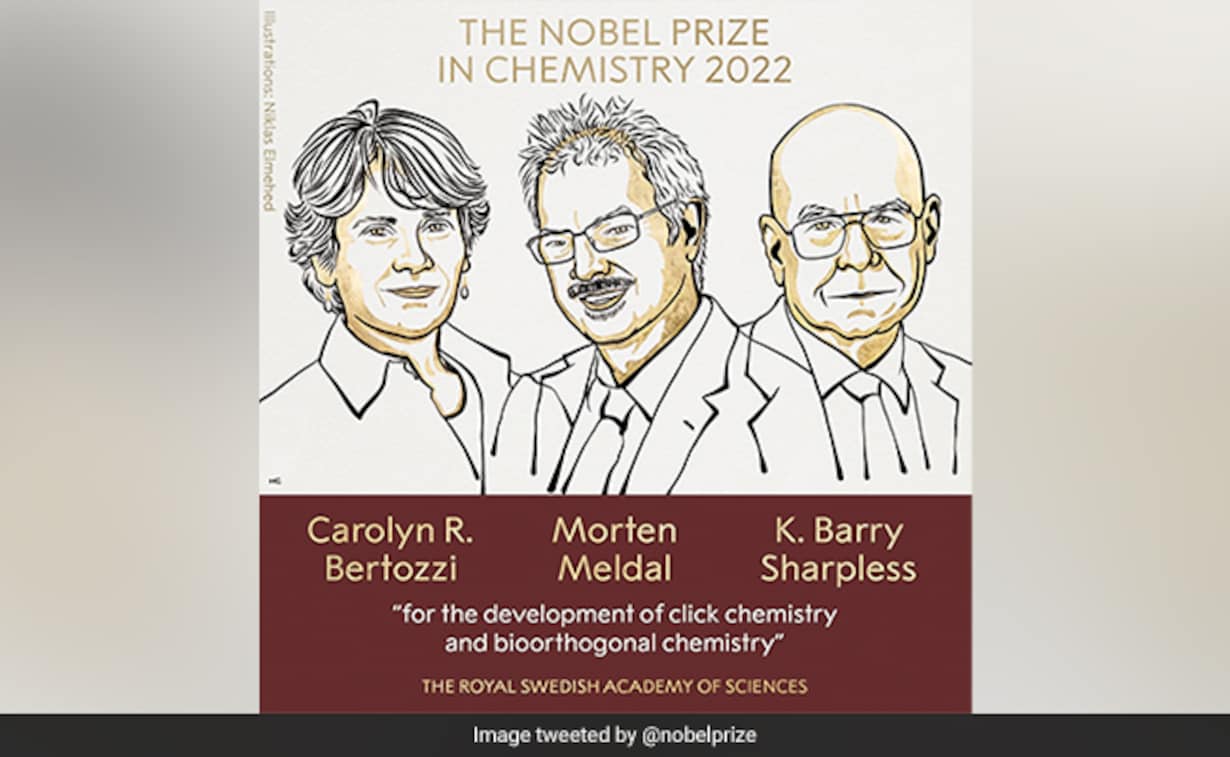 The 2022 Nobel Prize in Chemistry has been given to Carolyn R. Bertozzi, Morten Meldal, and K. Barry Sharpless for their creation of click chemistry and bioorthogonal chemistry, an imaginative method for creating molecules and having the ability to do it in live cells. The trio was chosen by the Royal Swedish Academy of Sciences, and the prize was presented to them on Wednesday, October 5.

The majority of Alfred Nobel’s estate was left to establish five prizes—one each in literature, physiology/medicine, chemistry, and peace—to honour “those who during the preceding year have conferred the greatest benefit to humankind,” according to his 1895 will. Nobel was a Swedish polymath and the creator of dynamite. In 1901, the first prizes were given out. The Sveriges Riksbank Prize in Economic Sciences in Memory of Alfred Nobel is the sixth honour, which isn’t a Nobel in the strict sense. It was created in 1968.

The Nobel Foundation’s Board of Directors increased the prize money to 10 million kroner (about $.9 million at the current exchange rate) each prize category in 2020.

Through 2021, 188 Nobel Prize laureates will have received the Chemistry Nobel Prize, which has been given out 113 times since its founding in 1901. With this year’s picks, Frederick Sanger, who first won in 1958 and then again in 1980, and K. Barry Sharpless, one of this year’s winners, who also received the Nobel in 2001, are the only two people to have won the Chemistry Prize twice.

Chemistry was the most significant science for Alfred Nobel’s own work, according the Nobel Prize website. He used chemical understanding to develop both his innovations and the industrial techniques he used.

The recipients of the Chemistry Nobel Prize this year were credited with “difficult processes made easier” by first laying the “foundation for a functional form of chemistry, click chemistry, in which molecular building blocks snap together quickly and efficiently,” and then expanding click chemistry by applying it to living organisms.

Click chemistry allows for a more direct way to construct molecules that are getting more and more complex. The theme of this year’s Chemistry Prize is working with what is straightforward and uncomplicated rather than overcomplicating things. Even by following a simple path, functional molecules can be created, according to Johan Qvist, Chair of the Nobel Committee for Chemistry.

Numerous useful applications in medicine, drug discovery, DNA mapping, and the production of novel materials have been made possible through click chemistry.

K. Barry Sharpless graduated from Dartmouth College with a B.A. He subsequently went on to pursue post-doctoral study at Stanford (1968-1969) and Harvard University before receiving his Ph.D. in Organic Chemistry from Stanford University in 1968. (1969–1970). Sharpless had academic positions at Stanford University (1997–1980) and the Massachusetts Institute of Technology (1970–1977, 1980–1990). He has served as The Scripps Research Institute’s W. M. Keck Professor of Chemistry since 1990.